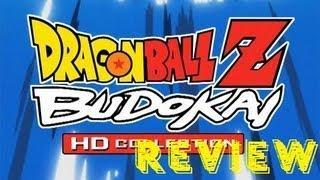 Ten years ago, the first Dragon Ball Z Budokai game was released for PlayStation 2, I was about to turn 11 at the time, the series was still in full swing being broadcast in America at this point, and so everything was fun and good. Oh, and this game was the coolest thing ever to a kid in the 4th grade. Two years later, we got Budokai 3. The may not encompass every game in the Budokai series, but those are the only two we got in the Dragon Ball Z: Budokai HD Collection. And I think that’s one of this game’s biggest flaws. Only the first and third Budokai game are on disc! They awkwardly skipped the second one and omit all the Tenkaichi Budokai games, Shin Budokai games, and Ultimate World. So, the package just feels a bit incomplete.

Next issue I have is, this remake feels incredibly lazy, in every sense of the word. Nothing about these games has changed except for newly replaced textures to give the game a shiny new coat. Except the presentation value is horrid. All the menus and cutscenes are shown in 4:3 with really half-assed minimalistic borders, while the all the fighting sequences are upgraded to 16:9 widescreen. So, the constant switching of borders and no borders is annoying. And one of my biggest gripes with the game is, the music.

With a game release like this released in the manor that it was, you figure your biggest selling point would be nostalgia to kids like who grew up with the series. However, by not licensing any of the original music from these games you complete shatter that and leave it feeling incredibly awkward. And the music from the original games was great.The replacement music is like replacement refs, they’re uncomfortable and it just feels like they shouldn’t be there. You figure they would have made brand new music, if they couldn’t secure the rights to the old scores right? Nope, they just ripped music from later Dragon Ball Z games and shoved it in here! At least they kept “Rock the Dragon”, though they didn’t fix the pacing issue with that cut-scene.

As for the in-game, Budokai has aged horribly. It wasn’t a great game when it first came out, but to an 11-year-old, you can hide that by the fact you’re playing through the Dragon Ball story, that and it was 2002, so it was a bit more acceptable then. Nowadays, as a 21-year-old, it’s annoying. Cheap tactics, not being able to quickly get back on your feet after taking a fall and all the original issues that made this game frustrating, are now equally, if not more frustrating as they were then. Not to mention, if you planned on jumping right into multiplayer and just playing that, well, you’ll be disappointed as you have only have 4 characters to play with (a sixth of the full character list), without having played through the game’s story mode first. So, have fun with that. Well, do the new HD textures look good at least? Honestly, not really. They are noticeably improved, but when improving on the graphics of the first game’s style just looks odd. It looks like it wasn’t meant for the PlayStation or Xbox that you’re playing on.

So, if you do get this pack all you will be playing is Budokai 3. With a much more robust character roster, vastly improved combat, and a much more streamlined quickened paced storyline, Dragon Ball Z: Budokai 3 was easily amongst the best Dragon Ball Z games. Just like Budokai, all the music here was swapped too. For those who really just love fighting games, you should probably steer clear from this one, as this is a pretty good fighting game, but long winded dragon rushes and ultimate attacks will just serve to get on your nerves. No, to thoroughly enjoy this, you absolutely need to be a DBZ fan prior to going in. If you are, you should be satisfied with what you get back. Personally, I’ve stopped playing DBZ games after Tenkaichi 2 as I personally couldn’t enjoy them as much as I did Budokai 3. So, if you’re into the free-roaming style of the newer Dragon Ball Z games, this one will be a bit of a change for you. Whether that’d be good or bad, is upto personal preference. As for the HD upgrade here, Budokai 3’s visuals perfectly complemented the series back when this game first came out, so this HD texture was very well done.

It really pains me to say it, but it is hard to recommend the Budokai HD Collection.