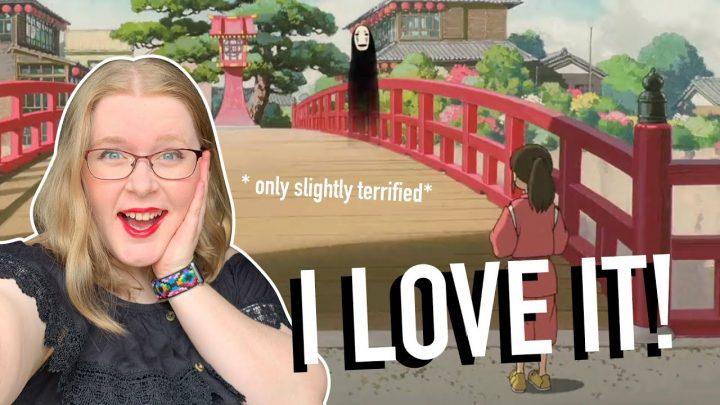 Watching Spirited Away for the FIRST time! (I’m terrified of No-Face!)

Apparently, I’ve had a childhood fear of No-Face for years now…what?

Want to see more? Watch more reactions in this playlist!: 🌟

Check out my art channel (where I make art inspired by the movies I react to here!): 🎨
https://www.youtube.com/channel/UCf7OPHDNkhCEzhYiu4QSo9Q

Have any animations you want me to react to? Leave your suggestions down below!

Have a lovely day!

How appropriately time to just…

My name is Amy.

this channel is all about.

And so today I’m gonna be watching Spirited
Away for the very first time!

That being said let’s get started and yeah.

I’m super excited to check out this animation!

This just feels so calm.

Hey that framing there…wait is it, is it
moving?

Okay so like the town comes alive and then
this community comes about???

I am glad I did not see this movie when I
was any younger because I was really sensitive.

The thought of her parents turning into animals.

She lost that connection like oh that would
have really scarred me as a kid!

Get on the ferry.

How is she supposed to not breathe that whole
time though?

Okay that didn’t explain anything.

I have known you since you were small?

I like how this scene is set up here.

We have Chihiro who’s in shadow because she’s
you know, she’s being a little bit sneaky.

She’s trying to work around this environment.

Then we have all of the figures coming in
on this side.

I don’t know how intentional the shot is but
that’s something cool about animation; is

that you get to control everything in the
scene.

So oftentimes animators will use lighting,
will use shapes, we’ll use various things

in the composition in order to tell you what’s
going on.

So yeah, I just thought that was kind of cool!

Oh no is she gonna cough from the smoke?

Well if she doesn’t have asthma then it might
not be a problem.

I get really bad reactions to smoke.

If I sniff it i’m just like “coughing up a
lung”.

They’re like…little uh what what creatures
are those?

And you can hear the steps of his feet!

Can you not hurt the child?

Despite not seeing this movie somehow I saw
that character.

I’m like I laugh because I don’t know what
else i’m supposed to do!

Even though some of the themes in this movie
are a little bit distressing, like her parents

turning into pigs and she’s upset and all
this type of stuff, there’s something very

calming about this movie.

in it if that makes sense.

is almost in a smile but like not quite a
smile especially because it doesn’t have eyes.

or if you’re doing a portrait is to give it
life by drawing the eyes.

And so because No-Face doesn’t have eyes,
there’s just there’s a lack of connection!

You know, that type of thing.

So there’s some psychology facts with your
art in there!

The frogs in the background!

So okay so that’s really interesting!

So No-Face, having no face can communicate
emotions.

I think it was just like the slight movement
of the eyebrows.

There was some vocalizing there but like it
went from like “here you go, here you go”

to then she declined and then it was like
“oh: and then you know what we’re gonna see

I always find it really interesting how much
can be communicated through very little.

How appropriately timed to just “AHHHH”!

So I wonder is the creature actually a stink
creature, or just does it really need a bath

and that’s why it smells so bad?

So yeah, it’s like bringing him in… yeah
i was like…oh we got the trippy flowers

That’s one thing I will say is like despite
how calming this movie is, it does move fast.

on to a different thing and it’s like what?

Yeah I was about to say…

I was like are they birds, are they feathers?

and all type of stuff.

Okay we’re just gonna get by with it?

Speaking of gore, look at that!

Okay, I need a band-aid.

What is going on?

But yeah i wanted to, it got chilly in here.

The baby is just stunned, like what is going
on?

They’re telling us his story but we’re distracted
by this little scene!

where are you going?

okay okay cool we’ll get the humans back!

What we got going on?

Is it supposed to be like they met in another
life?

Or they have some sort of like soul connection
type of thing…?

Why are you putting them to work, they’re
visitors!

That was so cute!

Hey everybody’s waving, even the lamp!

If you can’t tell I’m in a happy mood and
like what’s on screen is so like cute!

is because there’s something else going on…

They just land so gracefully

If they met when she was younger, then he’s
probably able to kind of move in between the

world or something, I don’t know.

It’s like good that they don’t remember but
also kind of like hey! l She did a lot of

work to get back to where they started.

Like she deserves at least a little pat on
the back!

How long were they gone?

Wait, there was some magic there?

How did they flip the car around on that little
tiny road?

is that is that it?

All right so that was Spirited Away!

That was a really cute movie!

I think I say that for like every movie.

It was cool getting to check out the studio
and i’m looking forward to checking out more.

So yeah stay tuned for what’s coming up next!

I’ve got a ton of other reaction videos, mainly
more like Disney and Pixar, but I am working

on branching out so there’ll be more studios
in there as well.

That’s all I’ve got for now.

Thanks for watching, have a wonderful day,
and byeeeeee!

No-Face is eating people, i’m bleeding and
I don’t even know anymore…