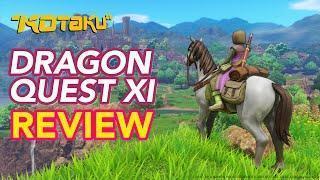 Dragon Quest XI is the best game in the 32-year-old series.

I don’t say that lightly. I’ve obsessed over Dragon Quest for the last thirty years. I’ve played every inch of every one of the games in the series. I played Dragon Quest XI in Japanese when it was released in 2017. Then I played it again. Now I’ve played it a third time, in English. Only when watching my own review did I decide to go ahead and declare this game the best in the series. Because it is.

This review contains snippets of cutscenes from the first 20 hours of the game, which some players may consider spoilers. I’ve taken care to exclude all dialogue and subtitles from the screen, however, and to present these cutscenes in something of an inscrutable order.

This review breaks the game down in seven chapters: