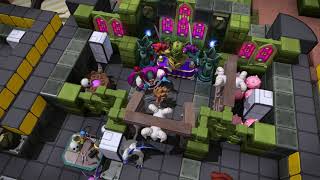 This is video #113 in my playthrough of Dragon Quest Builders 2 for the Sony PlayStation 4. This video does not contain commentary. To view the commentary version, click here: https://youtu.be/Wp0K06aAApY

Previously, Heorot found and recruited some monsters north of the Court of Chaos, including Griswold from earlier in the chapter, and brought them to the Ark at the Shrine of Hargon in Malhalla.

After resuming, Heorot reports in to Hellen (time 0:51). Zebadee points out Malroth’s probable location. However, getting there poses new problems. Errand complete!

The monsters clear out the area underneath the Ark so that they will be able to work on the undercarriage. At N04H’s request, Heorot draws out the Ark blueprint. Hellen, N04H, and Gremville have prepared some materials for the construction. Afterwards, the Sphinx music from Dragon Quest VII plays in the Ark.

For the next errand, Heorot speaks with Zebadee (time 7:28). Zebadee tells Heorot to turn the Haven of Hargon chapel into a Summoning Chamber. The room already has an Unholy Altar. Heorot must add a Forbidden Altar and a Storage Bay. He must also add a Sinister Sconce, a False Idol, and two Peculiar Pillars. Heorot learns the recipe for the False Idol.

Heorot furnishes the Haven of Hargon chapel with the required items. He has already looted several things.

With a False Idol added to the chapel, the room becomes a Sculpture Gallery (time 11:25). The player earns the gold trophy “Dedicated Decorator” for discovering 35% of the room recipes listed in the Builderpedia.

Heorot reports in to Zebadee (time 12:49). The residents will now work on converting Malroth’s detritus to useful materials in the Unholy Altar. Errand complete!

Afterwards, Heorot builds some materials to place in the Storage Bay for building the Ark. He also begins placing his crafting stations in the Ark.

Partway through the work, Arisplotle hails Heorot (time 21:12). There is another shakeup.

Heorot speaks to Hellen for another errand (time 23:12). She asks him to ring the bell to level up the base, motivate everyone, and draw in more monsters. A couple more errands become available from Gremville and Griswold.

I have to say, these guys are impressive at fighting off shadow monster assaults.

Processing some of the materials from the Hood’s cave results in Gold Ingots.

Heorot first builds a Brick Barbecue. Adding it to the kitchen with a Storage Bay results in a Small Simple Kitchen. Then, he starts cooking Manky Meat, Vile Vines, and a Frogstool on the Brick Barbecue. When thecooking is done, he acquires the Goregasbord. Then, he makes the Meaty Marshy Mountain, which requires 1 Goregasbord and 7 Strange Sand.

Heorot eventually winds up with a Small Gory Grillhouse (time 30:32).

He reports in to Gremville (time 30:59). Now, the monsters will start cooking in the kitchen. Errand complete!

Heorot speaks to Griswold for the next errand (time 31:56). Griswold also wants to save the strange plant life, so he asks Heorot to build a Creepy Conservatory. Well, he is in luck, because Heorot has already done so! The Creepy Conservatory requires a room with a Storage Bay, 4 Budding Poxgloves, and 2 Blooming Poxgloves. The Poxgloves can be found growing on the cliffs nearby. Since the work is done, Heorot turns in the errand right away. Errand complete!

Afterwards, Heorot rings the Builder’s Bell (time 33:55). The base reaches Level 2, which is the maximum for this area. The population increases. Heorot learns yet more recipes: Citadel Column, Tainted Glass Window, Unholy Altar, and Helm. A Helm will be needed to complete the Ark.

Heorot speaks to the newcomers (time 35:16). Three Gargoyles and a couple of Grimlins move aboard the Ark.

Heorot reports in to Hellen (time 36:59). The errand to level up the base is complete! Unfortunately, monsters are drawing near.

Next time, Heorot and the residents of the Ark will fight the upcoming base battle, and then Heorot will go in search of a creepy power source.