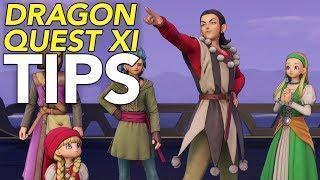 Dragon Quest XI is available now for PlayStation 4 and PC. Dragon Quest is a three-decade-old series of games that tend to take about 100 hours to complete. There’s a lot of stuff in these games. It’s understandable if Dragon Quest XI is your first one—there hasn’t been a single-player home console entry in the series since Dragon Quest VIII on PlayStation 2 in 2004—and it’s equally understandable if the ocean of stuff crammed into the game daunts or even terrifies you. Well, I’ve played all of these games about a billion times each, and I’ve got some little bits of advice. For example, I’ll explain how you can pretty easily build a party of four dual-wielding physical attackers in order to maximize the odds of defeating Dragon Quest’s notoriously slippery, infamously experience-pointy Metal Slimes super-early in the game.

Maybe this is the only tip you need, though: just chill with it. I played Dragon Quest XI over the course of a year, about a half an hour at a time, after taking a shower and before going to bed. I feel like Dragon Quests are the perfect games to play before bed.