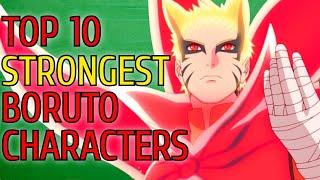 In this video I will be ranking the top ten strongest Boruto Characters. A lot of extremely strong characters were introduced in Boruto so I decided to rank them here. After Baryon Mode Naruto was shown in the Boruto anime a lot of people are wondering if he became the strongest chracter in the entire series. If you’re wondering who the strongest character is and where Baryon Mode Naruto will rank make sure to watch until the end of the video.