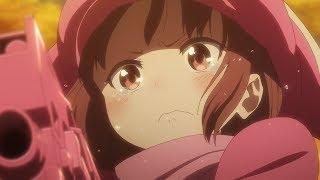 About SAO Alternative GGO:
In the world of guns and steel that is Gun Gale Online, LLENN has been a devoted, female solo player. She is obsessed with two things: donning herself entirely in pink and honing her skills with consistent game play. She soon discovers her love for hunting other players (a.k.a. PK), soon to be known as the “Pink Devil.”

Meanwhile, LLENN meets a beautiful yet mysterious player, Pitohui, and the two click right away. Doing as she is told by Pitohui, she enters the Squad Jam group battle.

For character concept, Sigsawa is teaming up again with Illustrator Kouhaku Kuroboshi from numerous popular anime projects including World Conquest Zvezda Plot and Kino’s Journey. Heading the animation production is the prestigious Studio 3Hz, whose work on Flip Flappers and Princess Principal received much acclaim.

The newest expansion into the SAO universe and the most talked about shared world entertainment’s TV anime series begins April 7, 2018 on Crunchyroll and Hulu!