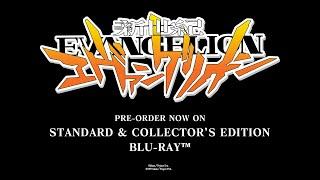 The legendary series #NeonGenesisEvangelion, available on Blu-ray in North America for the first time ever.

The Standard Edition is an essential five-disc set that will contain over five hours of bonus features, including animatics, TV commercials, music videos, and more. The Standard Edition will be widely available in stores and online wherever Blu-ray box sets are sold.