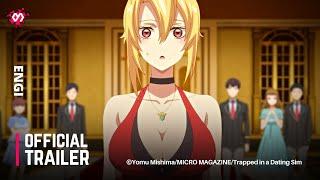 DISCLAIMER :
This anime is pending approval.

INTRO :
rapped in a Dating Sim: The World of Otome Games is Tough for Mobs ( 乙女ゲー世界はモブに厳しい世界です, Otomegē Sekai wa Mobu ni Kibishii Sekai Desu) is a Japanese light novel series written by Yomu Mishima and illustrated by Monda. It was originally self-published as a web novel on the Shōsetsuka ni Narō platform by the author beginning on October 1, 2017 and ending on October 15, 2019, concluding with seven parts and 176 chapters. It later began publishing as a light novel by Micro Magazine under their GC Novels imprint on May 30, 2018. A manga adaptation of the series by Jun Shiosato began serialization on October 5, 2018 and is published under the Dragon Comics Age imprint by Fujimi Shobo. Seven Seas Entertainment publishes both the light novel and the manga adaptation in English. An anime television series adaptation by ENGI is set to premiere in April 2022.

SYNOPSIS :
Office worker Leon is reincarnated into a particularly punishing dating sim video game, where women reign supreme and only beautiful men have a seat at the table. But Leon has a secret weapon: he remembers everything from his past life, which includes a complete playthrough of the very game in which he is now trapped. Watch Leon spark a revolution to change this new world in order to fulfill his ultimate desire… of living a quiet, easy life in the countryside!