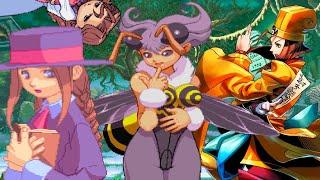 Darkstalkers is one of my favorite fighting games and I think it’s time we finally cover it for a full list. But instead of talking about the heavy hitters of the series, like Morrigan, Felicia, and Demitri, I want to look at the lesser seen members of the series. The characters that appear alongside the main, selectable fighters have some cool hidden lore that we tend to overlook. I’ll be covering some of the most significant side characters in the series, whether they’re in characters animations, backstory, or just a hidden fighter.