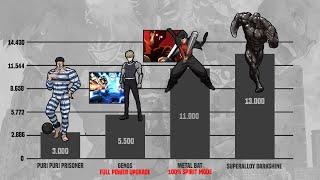 Today’s video deals with the power ranking of every S-Class hero in the anime ONE PUNCH MAN. And yes… there is already the official ranking by the ‘hero association’, but the official ranking does not just include strength, speed, fighting abilities etc. It also includes justice & popularity, what is meaningless when we are talking about how powerful a character is. So I decided to make a new ranking with all S-Class heroes in (nearly) every variation.

The ranking points are mainly based on the appearance in anime and manga. Some characters are still ‘mysterious’, so a few ranking are just estimated.

In the following part I will explain why I give which hero what powerlevel:
(unfortunately just in key points, because of the YT-description limit of 5000 signs…)

SUPERALLOY BLACKLUSTER:
++ superhuman strength
++++ best defense among all the heroes
+++ able to defeat demon class monsters with a single punch
++++ capable to defeat CARNAGE KABUTO within 15 minutes (according to virtual genocide system)

KNIGHT DRIVE:
++ immense speed and leg strength in his CENTAUR form
++ able to slice through multiple monsters in his SILVER FORM
+ tactical and calculating fighter

METAL KNIGHT:
+++ superhuman intelligence
– combat robot was destroyed by GOUKETSU in ease
+++ with his arsenal of weapons able to defeat ELDER CENTIPEDE (according to GYORO GYORO)

ZOMBIEMAN:
– physically weakest among all the S-Class heroes
++++ superhuman regeneration, immense endurance
++ able to withstand an onslaught from CARNAGE KABUTO

ATOMIC SAMURAI:
+++ able to strike 100 opponents with one strike
++++ able to keep up with the dragon class monster BLACK SPERM

BLAST:
+++++ able to the defeat the whole S-Class (according to TORNADO)
+ able to shoot lasers from his eyes
++ psychic powers
++++ command trillions of robots
+ nearly kills ELDER CENTIPEDE