One Punch-Man Characters Ranked From Weakest To Strongest

One Punch-Man Characters Ranked From Weakest To Strongest 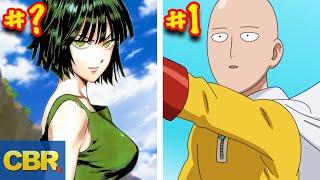 One Punch Man is perhaps one of the most unique series in the history of pop culture. Combining a love of Shonen series and superhero comics with satire, One-Punch Man has flipped the hero narrative on its head, leading to a world fugaroull of fantastic storytelling and gut-busting comedy that captures the magic of superheroes and Shonen series while also understanding what’s ridiculous about them.

Despite the main focus of the series being on spinning the Shonen narrative, fans of the series are still quick to ask the age-old battle anime question of “who’s the strongest?” The short answer to that question is Saitama, but the long answer includes all the other strong characters featured throughout the series, so let’s take a look.

Everyone from the Tornado of Terror to Lord Boros, One-Punch Man is full of absurdly strong characters, both in the category of villains and amongst the heroes. In the hero category, we’ve got S-Rank heroes like Atomic Samurai, Superalloy Darkshine and Flashy Flash. In the villains category, there are super-powerful monsters like Mosquito Girl, Deep Sea King and Lord Boros. Suffice to say, there’s no shortage of insanely strong characters in the world of One-Punch Man and, in this video, we rank them all from weakest to strongest based on their abilities and the fights they’ve been shown in. Take a look to see how the rankings turned out and don’t forget to subscribe to CBR for more anime videos. Thanks for watching!