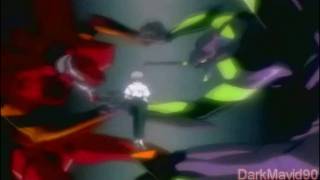 What’s new: Its colors are better, the image is sharper and clearer, it takes up the whole screen and is in !080 HD

This is a very basic tribute to the anime Evangelion and it focus around Shinji and his relationships with Rei, Asuka, and Kaoru along with someof my favorite scenes. I leave you off with the to be continued sign because despite the fact that ithas 26 episodes and several movies, Evangelion never really ends, hence a to be continued at the end of my AMV.

Who ever want this as thier ATP Christmas gift owes me big, really BIG. I’ve never watched Evangelion before and when I looked for it on Youtube I could only find the Japanese version with english subs. But that was the point of all this ATP members. It was meant for everyone to gain new interests and sadly I’m now interested in Evangelion despite the fact that I am unpleased with the lack of a concrete ending.

Merry Christmas and this is my last vid of 2008!

I DO NOT OWN ANY OF THE MATERIAL, IT ALL BELONGS TO IT’S REPECTIVE OWNERS

Top Ten Lines from Spirited Away