My Neighbour Totoro on stage | 2022 trailer

My Neighbour Totoro on stage | 2022 trailer 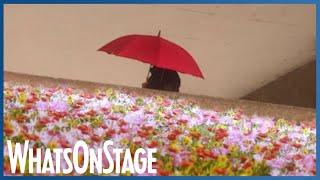 A new trailer has been released for the upcoming world premiere of ”My Neighbour Totoro”, which runs at the Barbican Theatre this autumn.

The hotly anticipated stage adaptation of Studio Ghibli’s animated film smashed the record for ticket sales in one day, previously held by the 2015 Benedict Cumberbatch-led production of ”Hamlet.”

The 1988 animated feature, penned by Hayao Miyazaki, follows the lives of sisters Satsuki and Mei as they move to the countryside and encounter magical creatures. It was first shown on the big screen in the UK in 2001, at the Barbican Cinema.

The stage production will blend music, puppetry and storytelling to bring Miyazaki’s tale to life, with Tom Morton-Smith (”Oppenheimer”) adapting the book.

Joe Hisaishi’s beloved score will be performed live in the show, which also has new orchestrations by Will Stuart and sound design by Tony Gayle.