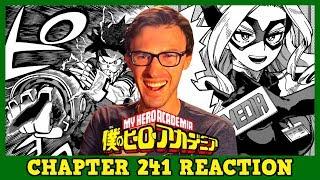 Here is my live reaction to My Hero Academia Chapter 241!

It feels good to be back with Class 1-A. I loved the arc with our villains but I missed Deku and company. So it looks like we are about to be getting another internship arc. Now that Todoroki and Bakugo have their licenses, they can participate. Can’t wait to see where this arc goes and what Chapter 242 will show us.