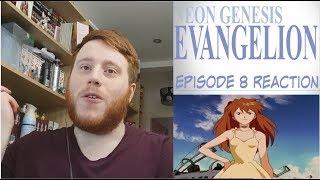 Misato brings Shinji and his friends Toji and Kensuke on a flight to a United Nations carrier battlegroup which is transporting Evangelion Unit 02 and its fiery German pilot, Asuka Langley Soryu, to Japan. Escorting Asuka to Japan is Misato’s old friend, Ryōji Kaji. In the middle of some awkward introductions and reunions, a massive aquatic Angel, Gaghiel, begins attacking the fleet, and Asuka determines that she will fight it using Unit 02, by playing “hopscotch”. However for both due to their unfriendly meeting, she takes Shinji with her. The Angel drags Unit 02 underwater, and Misato devises a plan to kill it by lodging two sunken battleships in its mouth and then firing all weapons into it. By cooperating, Asuka and Shinji pull off the plan and the Angel is killed, and it is revealed that both Shinji and Asuka broke their synchronization records. Kaji is seen delivering Adam to Gendo, and Asuka transfers to Shinji’s class.