25 Things You Missed In Spirited Away

25 Things You Missed In Spirited Away 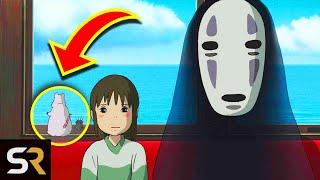 Did you catch all these hidden moments in Spirited Away?
Subscribe: http://bit.ly/Subscribe-to-Screenrant

Let’s go back to a simpler time. Back in 2003, the work of Hayao Miyazaki and the team at Studio Ghibli captured the world’s heart with Spirited Away. What you probably didn’t know is the fact Miyazaki didn’t even make it to the ceremony. He wasn’t there to see his film become the first and only foreign featured film to win Best Animated Feature at the Academy Awards.

That’s what’s in store for you with this video. We’ve got tons of behind the scenes and moments in the film that you missed out on during your multiple viewings. We’re talking about stuff like the crew’s rush to get the film produced on schedule, how multiple voice actors ate KFC during some recordings, and the spiritual symbolism attached to the film. We’re trying to say this video, right here, is required viewing for any Studio Ghibli fan.

Screen Rant is going to run the gambit. We’re explaining the characters’ names and how the story came together—subtle nods to other studios and even changes made under the American crew. There’s so much in store that we just want to get into it.

Strap in, and get ready to journey back to those warm feelings and full-hearted attempts at the animation that we long for today. We’re giving you a reason to go back and watch Spirited Away here (not that you needed an excuse)!

Don’t look a gift horse in the mouth. Sit back and click play; you won’t regret it–promise!

Check out the Behind The Screen Podcast – By Screen Rant on Spotify!